Latexco is a family business that has been developing latex, technical PU foams and springs for the bedding industry for over 60 years. Latexco has come a long way in that time, starting from a small family business in Tielt, Belgium, to become a business with a global presence. Today we employ over 600 people worldwide. The entrepreneurial spirit from the early days has never disappeared. We’ve grown, and we’ve grown up. Our organization has evolved and professionalized accordingly.

Throughout our international expansion, we’ve always remained true to ourselves. At Latexco, we always cherish the same core values: respect, commitment and trust. And this is translated into respect for people and the environment, personal service, superior quality products and innovative solutions for every one of our customers. Each and every day.

Our solid reputation for high-quality latex along with a strong focus on the development of specific technical PU foams and springs enable us to be a one-stop-shop for customized sleeping comfort. Thanks to our worldwide geographic spread we strive to be the preferred partner to design the unique sleeping experience every bedding company around the globe is looking for.

Since decades, Latexco has been a pioneer in sustainable business development. Latexco worked hard to minimize the environmental impact of its activities. We were the first in our market to deploy our own water treatment plant, to use 100% green energy in our manufacturing processes and to set up our own recycling company.

In the last 60 years, Latexco has grown from a small family business into a world-class player in the bedding industry. That doesn’t happen just by accident. It’s only possible if we live up to our promises, on all levels. For doing business boils down to one word: trust. Trust that we’re providing the right quality. Trust that we’re asking a fair price for it. Trust that we’ll deliver on time.

Latexco sets great store by an exceptional level of customer service. That’s why we invest continually in our sales-, production- and logistics centers, both at home and abroad. Thanks to those efforts we provide an efficient service tailored to each customer’s specific needs.

Why do over 70% of the world’s bedding manufacturers choose components from Latexco? Well, because Latexco does not compromise on quality. By closely monitoring every quality parameter, in every step of the production process, we ensure that our mattresses, pillows and toppers are of outstanding quality.

Latex is a white milky fluid, a stable dispersion of rubber (organic polymer) particles in water.

Synthetic latex is a mixture of two oil derivatives: styrene and butadiene.

Latexco is proud to have obtained certification by the Forest Stewardship Council®. The FSC certification is a major step forward in Latexco’s continual efforts to work sustainably. Everything that Latexco does testifies to its environmental concern. 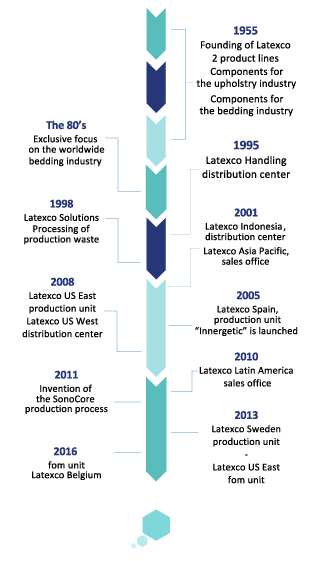 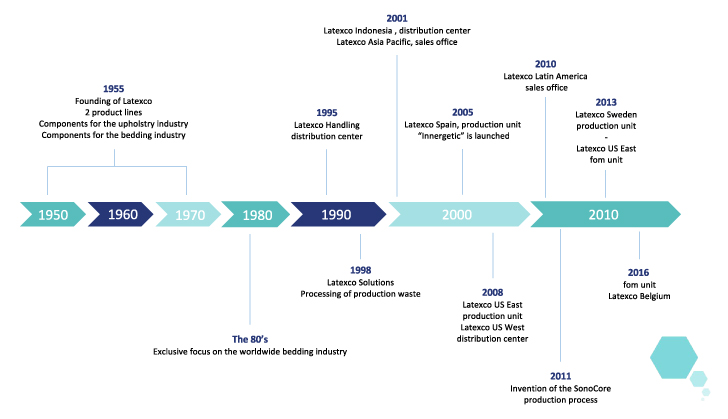 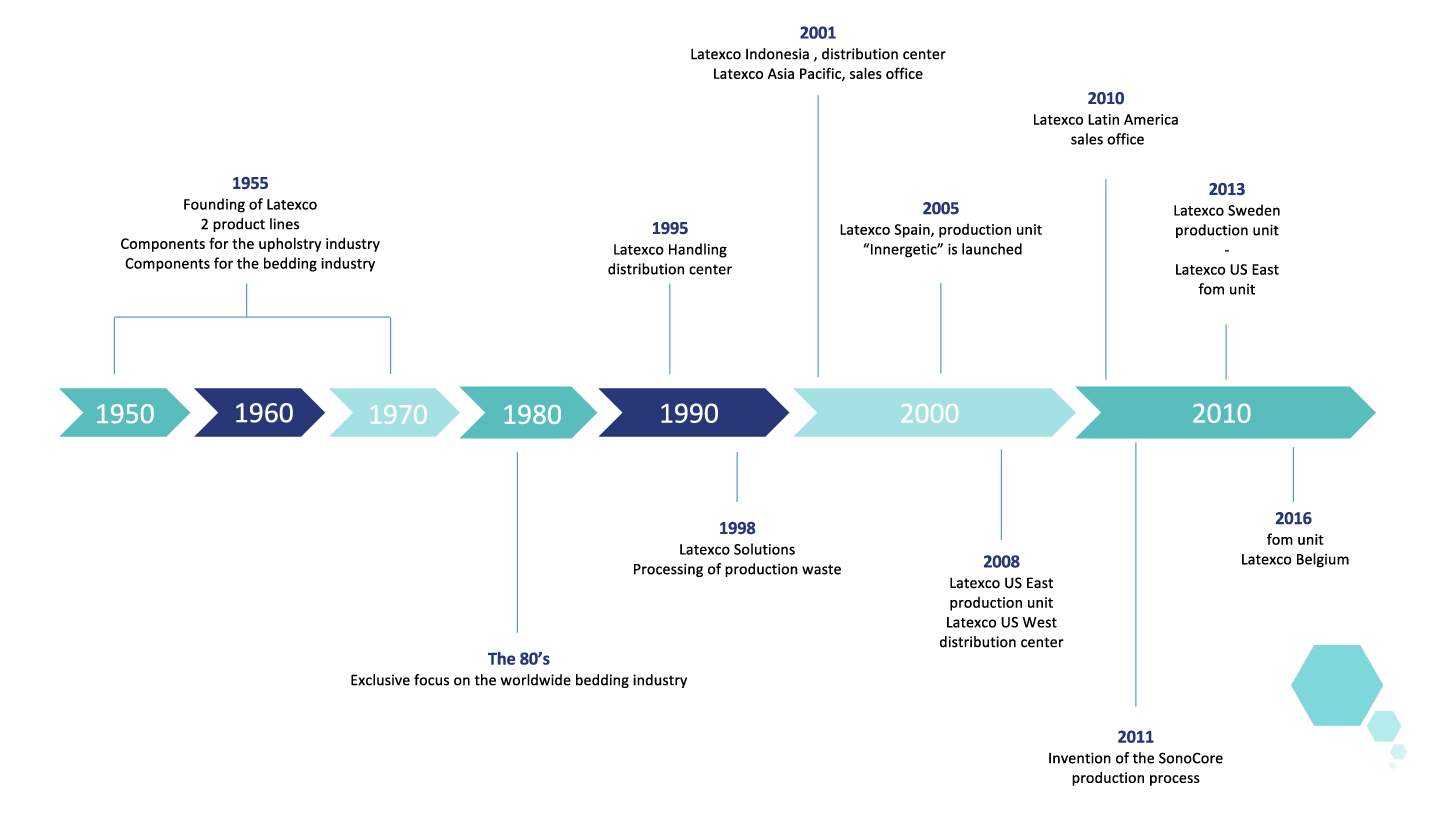 In 1955, Sylvain Maes, father of the current owner Luc Maes, founds Latexco. In the early years, Latexco is active in two sectors: the bedding and the furniture industry.

From the 1980s onwards, Latexco starts focusing on the bedding industry. The company manufactures mattress cores, pillows and toppers in latex foam.

To drive its steady growth in the nineties, Latexco invests in a brand-new logistics center. In these years, the company increasingly focuses on sustainability. Latexco speeds up its efforts to reduce its carbon footprint. Just before the end of the century, Latexco Solutions is born. This Latexco subsidiary processes industrial residues, including the waste that is inherent to Latexco’s production process.

Latexco consolidates its international expansion and new Latexco facilities open around the world. We inaugurate a manufacturing and distribution unit in Indonesia, as well as the Latexco Asia-Pacific sales office. A few years later, a new production and logistic unit is set up in La Almunia (Zaragoza – Spain) and we launch the Innergetic quality label. ‘Latexco US East’, a production and logistics unit in Lavonia, Georgia, and ‘Latexco US West’, a manufacturing and distribution center in Los Angeles, California (US) follow two years later. In São Paulo, Brazil, we also establish a sales office to cover Latin America.

Latexco keeps innovating and develops the unique and patented SonoCore process in 2011, resulting in the PULSE product line.

Latexco decided to invest in producing technical PU foams – the ‘latexco fom’ range. Following the establishment of a fom unit in the US, in 2013, we also set up a fom unit in Belgium in 2016.

Since 2018, Latexco started to produce springs. Latexco is now a one-stop-shop for comfort in the bedding market.

Do you have a specific question or request?